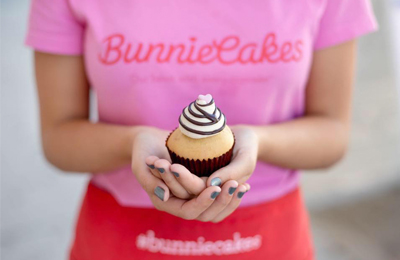 It’s been six years since Mariana Cortez opened a brick-and-mortar in Wynwood for her Bunnie Cakes company, a vegan, gluten-free bakery. Now the mother of five is gearing up to open a new location in downtown Doral this summer.

This past December, Bunnie Cakes opened a pop-up shop at the downtown Doral Holiday Center, offering whimsical cupcakes festooned with reindeer, snowmen, and Santas. Now the bakery, known for its mini cupcakes, is opening a permanent shop.

“We’re so excited to open in Doral because our customer base has really wanted this for a while,” Cortez says. “It also means growth for the Bunnie brand.”

Inside the 1,730-square-foot space, Cortez will offer her signature lineup of sweet and savory treats, along with baking workshops and cake decorating parties.

“Our Doral store will be similar to our Wynwood location in that it will offer cakes, cupcakes, and savory treats,” she says. “It will also have a Bunnie studio, where we plan to offer a lot of fun programming just like we do in Wynwood.”

“Doral doesn’t have a lot of vegan options, especially those that include Venezuelan favorites, such as cachitos and pan de jamón, so we’re happy to fill that void,” she says.

Formed in 2009, Bunnie Cakes grew out of Cortez’s desire to serve a vegan cake for her son Luke’s birthday and being unable to find a bakery that made one. Her company took flight inside her home kitchen, and by February 2013, she was ready to debut her brick-and-mortar.

In the past few years, Cortez has vastly expanded her product line, which ranges from dozens of cupcake and cake flavors — including chocolate chip, guava, key lime, and confetti — to grab-and-go sandwiches and snacks. Her treats are also sold at select Whole Foods stores in South Florida.