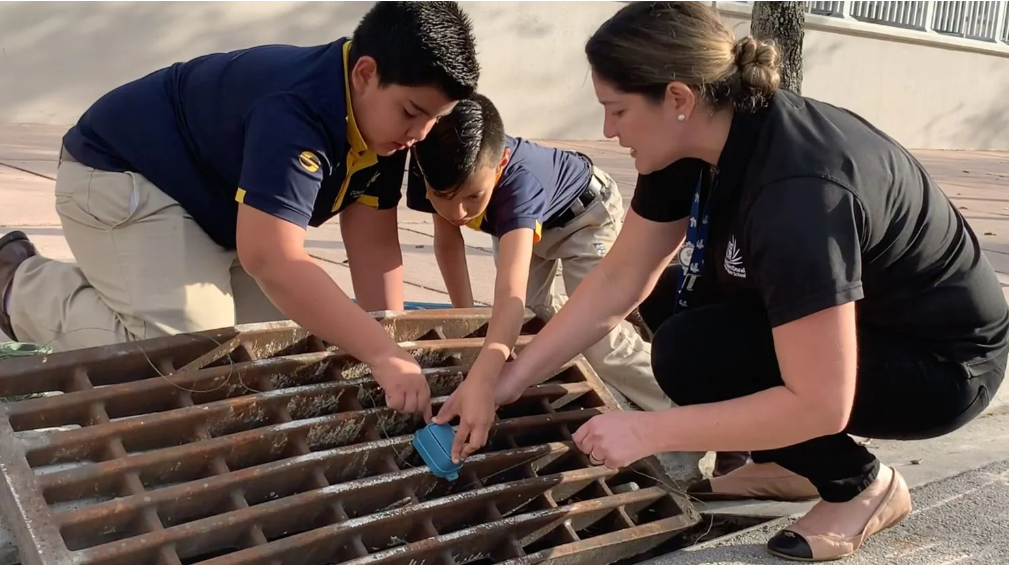 Device to monitor storm drains earns their school $100,000 in Solve for Tomorrow contest.

In late May, storms flooded streets in Miami-Dade County in Florida. The floods made cars sink and turned roads into brown rivers.

A team of local middle school students has a plan to stop this ongoing problem.

Alyssa Neuber, Bianca Verri and Jose Pirela are sixth-graders at Downtown Doral Charter Upper School. They designed a device to warn city workers when and where there is a danger of flooding. The team is one of five grand-prize winners of the Samsung Solve for Tomorrow Contest. The contest asked for science, technology, engineering and math (STEM) solutions to the biggest challenge facing a school community.

“I’ve been living here my entire life, and all of us have encountered problems with flooding,” says Bianca. “We knew that was the problem we were going to tackle.”

Flash flooding can happen when storm drains get plugged up and, especially during hurricanes, overflow into streets. It’s the leading cause of weather-related deaths in the United States.

The students’ device uses a laser system called lidar, which stands for “light detection and ranging.” The device, if approved by the city government, could be attached to Doral’s 2,575 storm and manhole drains — one device per drain. If a drain gets clogged with sediment, the device could send a computer alert to the city’s stormwater management office. Then the stormwater manager could send someone to clean the drain.

“We had our class help us in the beginning to find information about how we were going to use lidar,” says Jose.

The three STEM whizzes then started to work more closely with their science teacher, Rebeca Martinez. They figured out what each of them is good at. For Jose, that involved exposing the problem and coding. For Alyssa, it was calculating costs. For Bianca, it was understanding how lidar works.

Class parents who were engineers and website coders helped them figure out the details.

Starting in March, the school was closed, so team meetings went virtual. Luckily, says Bianca, “We already had a prototype device, and we just had to tweak it some more.”

They also had to pitch their idea virtually to contest judges.

Twenty finalist teams were whittled down to the five grand-prize-winning teams.

A team from Dougherty Valley High School in San Ramon, California, made a wildfire alert. At Fairfield Senior High School in Fairfield, Ohio, students designed an app to prevent deaths of kids left in hot cars. Students at the North Carolina School of Science and Mathematics in Durham invented an app that helps people recycle. And in Wisconsin, kids at Omro High School created a sensor that lets ice fishers know when it’s safe to walk on frozen lakes.

Each of the five teams won $100,000 for technology and supplies for their science classrooms. The Doral students plan to continue working with the city after the months they spent on the project.

“We put in a lot of effort and had to trust each other and that each one knew what they were talking about,” says Alyssa.

Figuring out how to build the drain sensor “was overwhelming at the beginning — I’m not an engineer,” says Martinez. “But I learned the kids can actually do this, working together as a team.”